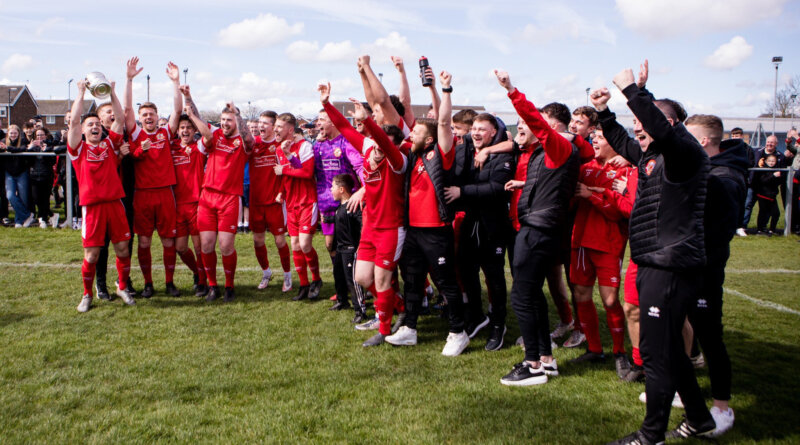 The trophy was presented to captain Adam Forster by EBAC Northern league president George Courtney. The champions were given a kings guard applaud on to the pitch by the West Allotment players and the officials.

A positive start to the game for Shields as 3 minutes in to action Paul Van Zandvliet has a shot that is parried behind by Fin Hodgson.

5th minute and West Allotment go 1-0 up through an own goal by JJ Chrisp as the young left back heads the ball into his own goal as he attempted to clear the ball.

10th minute and another huge chance for the visitors as Guy Bates sends an effort off the upright after a good move from Allotment.

A back-and-forth affair in the opening of this game as Dan Turner produces a great bit of skill to beat his man, and plays in Callum Smith who sends his curling effort just wide.

19” West Allotment fail to clear their lines and the ball is bobbling all over the penalty area and Van Zandvliet pounces on the Allotment’s mistakes with a simple tap in to make the game evens.

After some good spells of possession it seemed that Shields had started to gain a foothold in this game and in the 39th minute the ball broke for striker Dan Wilson calmly slotted the ball home for shields making it 2-1 before the break.

In the 56th minute its Shields who make the first changes of the game as captain Adam Forster is replaced by shields Veteran Gary Ormston.

Two minutes later in the 58th minute Smith skips past several Allotment defenders to put himself one on one he then rounds the keeper to put the ball into an empty net to make it 3-1 Shields.

The onslaught from Shields on a tired looking Allotment side continued in the 64th minute as Dan Wilson scored his second of the game which was his 40th goal of the season.

North Shields make another change in the 68th minute as goal scorer Van- Zandvliet is replaced by Regan Paterson.

In the 73rd minute Allotment still trying to fight in this game as Bates sends his effort high and wide and then proceeds to check the pitch after missing his shot.

In the 80th minute Shields continued to attack and seemed to had made it 5 for the day but the goal was ruled off for offside.

In the 85th minute a penalty was rewarded to Allotment for a handball on the goal line by Anthony Myers.

Callum Larmouth stepped up and buried the ball into the roof of the net to notch his 30th goal of the season.

Despite the late effort it was too little too late for Allotment and as the Full time whistle blew the game ended 4-2 and North Shields were presented with the league trophy. 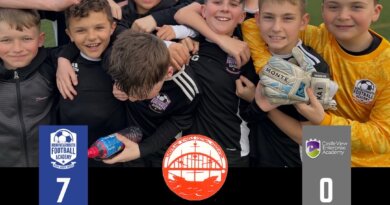