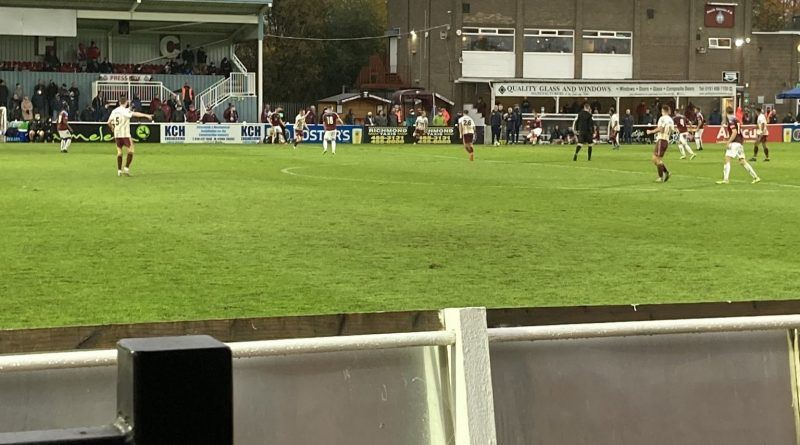 South Shields FA Cup run continues after a 2-0 win against Halifax Town in the fourth round of qualifying at the 1st Cloud Arena on Saturday.

Goals from Darius Osei and captain Robert Briggs put the Mariners in the FA Cup first round draw for the first time since 1973.

South Shields were looking to continue their impressive cup run after beating Southport earlier this month 4-2 on penalties. This was the first FA Cup game this season for Halifax, who are placed two leagues above the Mariners in the National League.

The opening minutes were even, with Halifax using their pace and intricate passing to try and apply pressure to the hosts. South Shields were not deterred and kept their cool, building up play from the back and using the wings to get forward.

Halifax continued to press in the South Shields half and were aggressive in their style of play but found themselves frustrated and struggling to create anything from their attacks.

The Mariners had the first real chances of the game in the opening minutes. The first came when Jason Gilchrist powered down the middle and had a shot saved. The next saw a goal-line clearance from the Halifax defence after a shot by Briggs.

Despite playmaking attempts from the Shaymen’s Danny Williams, South Shields were looking solid defensively and going forward. The hosts thought they had scored the first of the game after Osei made an excellent run, passed to Briggs who teed the ball up for Gilchrist who planted it home. However, the offside flag went up and the goal was disallowed.

South Shields looked the more likely to get the first goal of the game and were rewarded in the 39th minute. A cross from Gilchrist met Osei, who headed the ball into the top right corner.

Straight away the Mariners were searching for a second, and an effort from Alex Kempster was blasted over the bar.

The away side were also on the hunt for an equalizer before the end of the half and came close with an attack down the right which was eventually scuffed out of play.

Halifax began the second half strongly, pressurising the Shields defence and having a couple of close shots on goal.

However, the Mariners began to wake up and made some good attacking moves, forcing the Shaymen to make mistakes.

Osei came close with his second of the game, firing just wide of the bottom corner. Soon after, Jordan Hunter had another crack, his shot firing over the Halifax goal.

Shields finally got their second in the 70th minute, after Briggs weaved around the defence and rolled the ball home.

The Shaymen looked a bit rattled in towards the end of the game but were still trying to push for a goal. However, it was Shields who found the net next when substitute Jack Hindle scored, but it was ruled out for a handball in the build-up.

Halifax did have a couple of shots on goal in the closing stages, but couldn’t muster anything as Mariner’s keeper, Myles Boney, was able to make a couple of good goal-line saves.